A receding hairline can occur in both men and women, though it is more common in men. It is one of the first signs of male pattern baldness and can be caused by a variety of factors.

Male pattern baldness is a natural part of the aging process – by the age of 50, it affects more than half of all men. It causes hair loss in several different patterns, but one of the most common ways it begins is with the hairline creeping back either side, exposing more of the scalp/forehead.

This is known as a receding hairline. It’s often accompanied by a bald spot on the crown of the head and, later, thinning on top.

The hair can either keep receding until the bald spot and hairline meet, leaving no hair on top of the head. Or it can leave an “island” of hair above the forehead.

The process usually starts above the temples. From there, the hairline moves back across the top of the head. This often leaves a ring of hair around the top of a bare scalp. Thinning hair may continue to grow on top.

A receding hairline can also begin above the temples, but the hair in the middle may stay closer to the forehead. This V-shaped hair growth in front is often called a “widow’s peak”.

The sides and back of the head can eventually become bare, though many men are usually left with some hair unless they shave it all off. In women, the sides and back are typically spared, but the part widens over the top of the scalp and thins considerably. There are many causes of receding hairline.

Up to 80 percent of European men may have a receding hairline by the time they are 80 years old.

Hair loss is usually a natural part of aging. There are thousands of hair follicles on the surface of the scalp, each growing their hair. As these hairs fall out, new ones replace them. But if hair follicles become damaged for any number of reasons, the result can be hair loss and a receding hairline.

Hormonal changes may be the trigger for hair loss in both men and women. A hormone called DHT may have a link to male pattern baldness, as it causes the follicles to shrink to the point that no hair can grow in them anymore.

Family history seems to play a role in receding hairlines. Men with a family history of baldness may be more likely to lose their hair. The loss may even follow a similar pattern as previous generations.

Some medical procedures or treatments may also cause hair loss. A typical example is a chemotherapy, which often causes a person’s hair to fall out.

Illness or stress may lead to sudden hair loss called telogen effluvium. People usually experience this as an unexpected shedding — where they lose much more hair than usual in a short period. Luckily, this hair loss often reverses itself without treatment.

Stress can be a major causative factor linked to hair loss. The name for stress-induced hair loss is telogen effluvium. The condition results in shedding of copious amounts of hair each time the hair is combed or shampooed.

Some factors that are associated with the hair loss causing receding hairline are:

Also, other factors that may cause receding hairline include: 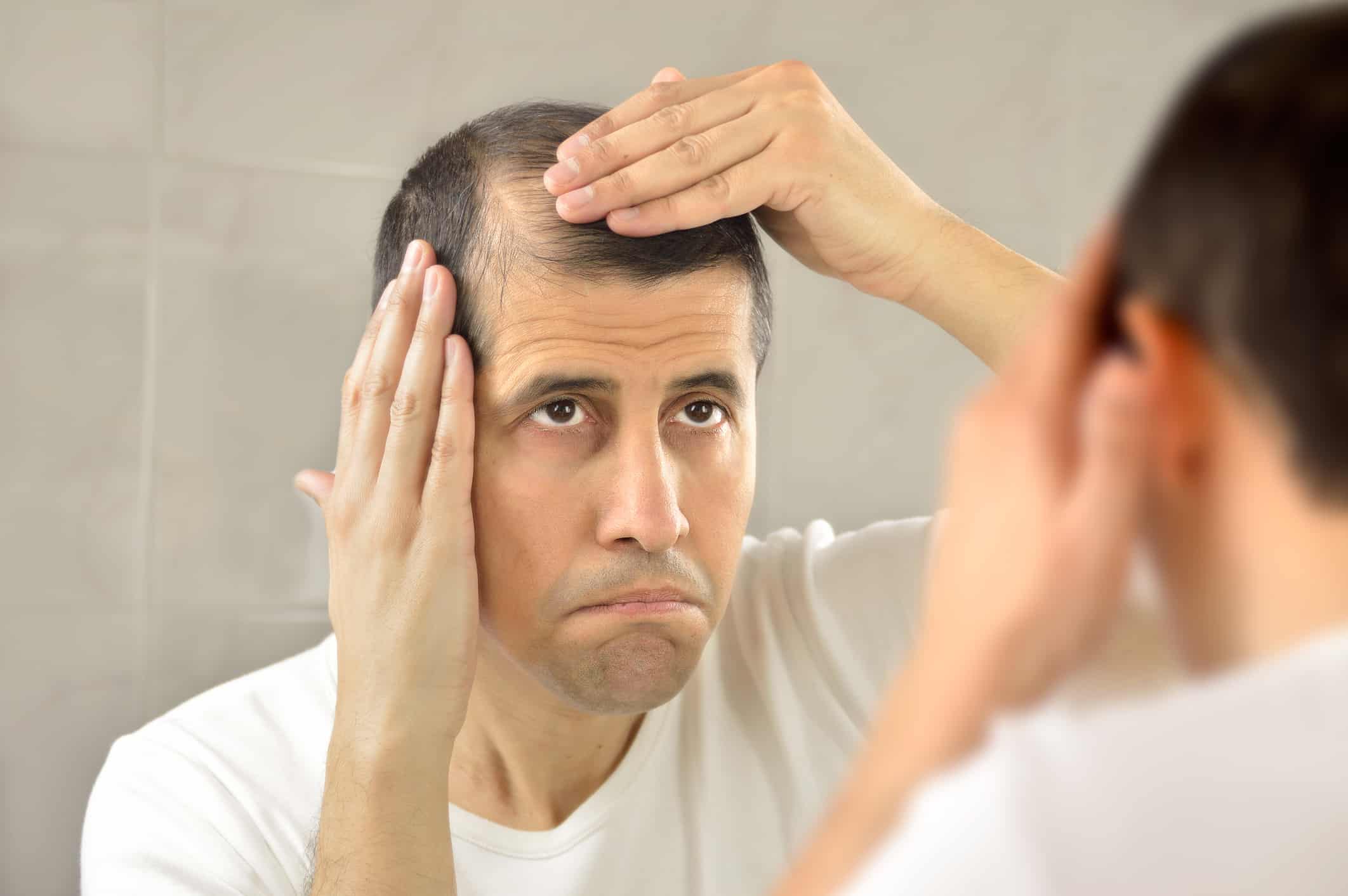 No guaranteed treatment will stop a receding hairline. But there are health strategies and treatments you may want to consider to keep your hair as full as you can for as long as possible.

Eating a diet that’s high in antioxidants can help your hair look healthier and full.Antioxidants are ingredients that fight oxidative stress, which can age your hair. Blueberries, spinach, kidney beans, and walnuts are all rich in natural antioxidant ingredients.

The following vitamins and minerals are an essential part of healthy hair growth:

Incorporating lots of leafy vegetables, nuts, and seeds may improve the way your hair looks and feels.

The most common over-the-counter medication for a receding hairline is called mini Doxia (Rogaine). Topical mini Doxia has been found to work better than a placebo in multiple studies Trusted Source.

Finasteride (Propecia) is a prescription medication that lowers the hormone levels that can cause your hairline to recede.

Topically applied herbal preparations may support healthier, fuller hair if you have a receding hairline.

You can mix several herbs in a carrier oil solution to create a conditioning treatment to leave on your scalp.

A hair transplant is a procedure in which a doctor moves hair from the back of your head to the front of your head, at your hairline. These implanted sections of hair will give your hairline a fuller appearance.

Some shampoos are specifically designed to be gentle on your hair and stimulating the hair follicles. While some shampoos contain chemicals that strip sebum (oil) from your scalp and leave follicles weaker, others can stimulate hair growth.

The active ingredient in these shampoos is ketoconazole.

Low-level light therapy uses lasers to stimulate hair growth on your scalp. It’s been found trusted Sources to be effective for both men and women with hair loss. Researchers theorize that the light sends a signal to your cells to begin the “anagen” (growth) phase of hair follicles.

Lavender oil has all been found to be promising treatments for a receding hairline. Essential oils should be mixed with a carrier oil, such as almond oil, coconut oil, or jojoba oil, before being applied to the scalp. Try some of these essential oils available on Amazon.

Regularly performed scalp massage may help you grow thicker, and healthier hair. Increased blood circulation at the site of your hairline could be why scalp massage works to stimulate hair follicles. Try massaging your scalp manually for at least 4 minutes each day.

Dihydrotestosterone (DHT) is a hormone in your body. When DHT levels rise, hair loss may increase.

You can decrease the DHT levels in your body by keeping an eye on your diet and including lots of lysine and zinc-rich foods. Snacking on cashews, almonds, and pecans is a simple way that you can lower DHT.

Stress has been linked to some kinds of hair loss. Bringing down stress and anxiety levels may seem easier said than done though.

Research has found that you can lower your stress levels through frequent time outside, relaxation techniques, and meditation.

If treatment doesn’t sound like the right path for you then perhaps your local barber holds the solution. Several hairstyles can work wonders for a receding hairline – these are a few of the best.

There’s no denying it’s the nuclear option, but shaving your head down to the bone can be a liberating experience. Going for a full chrome dome can restore some of the confidence that your receding hairline deprived you of. Plus, it can even make you look more masculine and dominant.

One step up from its clean-shaven cousin, the buzz cut is a military favorite, sitting somewhere between a short haircut and a shaved head. Your barber will take the hair down with a grade one or above on the clippers until it is the same length all over.

Repolarized by hit TV period drama Peaky Blinders, the textured crop has become one of the most popular trims of recent times. The good news is, the fact it’s styled forwards makes it an ideal choice for men with receding hairlines.

The classic crew cut is a military favorite due to it being one of the most timeless hairstyles around. Here, the back and sides are kept close and cropped with hair left only a little longer on top.